What is microseismic monitoring? 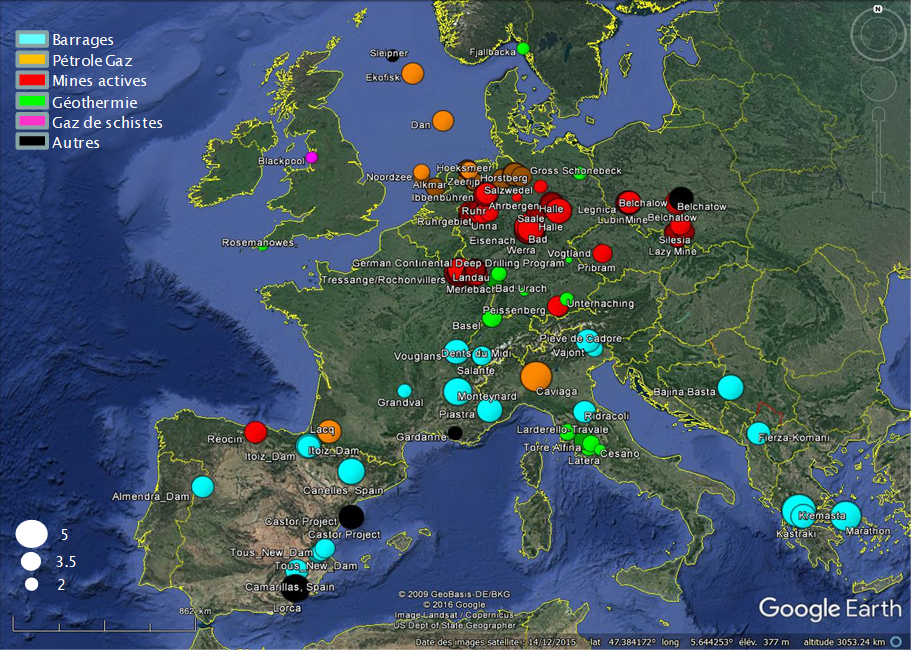 Location of the human-induced seismicity in Europe, from a non-exhaustive Ineris synthesis (Contrucci & Klein, 2017).

Microseismic monitoring is a passive non-intrusive technique which consists in detecting and recording the waves emitted during rock masses fracturing and cracking. The principle is therefore identical to that implemented in seismology, for a reduced scale by a few orders of magnitude (lower than 2).

Microseismic observation and monitoring are especially applied for the prevention of natural and industrial risks. They were primarily developed for the control of the exploitation of mines or hydrocarbon reservoirs, or also for extractive activities generating significant stress redistributions.

What are the industrial activities likely to cause anthropogenic seismicity?

There are two families of human-induced seismicity, depending on the way the underground is used (Figure 1 and 2):

Large dams filling or mine flooding are a more complex specific case: filling the reservoir induces both stress changes and pore pressure increase in the underground layers.

Whatever industrial fields may be, microseismic monitoring is the key point for risk management. Indeed, national networks are scaled to monitor regional natural seismicity, i.e. they do not enable to detect low-magnitude signals that might be an indicator of instabilities or conditions favorable to stronger earthquakes.

More precisely, the microseismic network should enable to detect, to locate and to characterize the events in terms of focal spatio-temporal distributions, source mechanisms and energy, in order to precisely study any potential causal relationship between the exploitation parameters and the detected seismic activity. 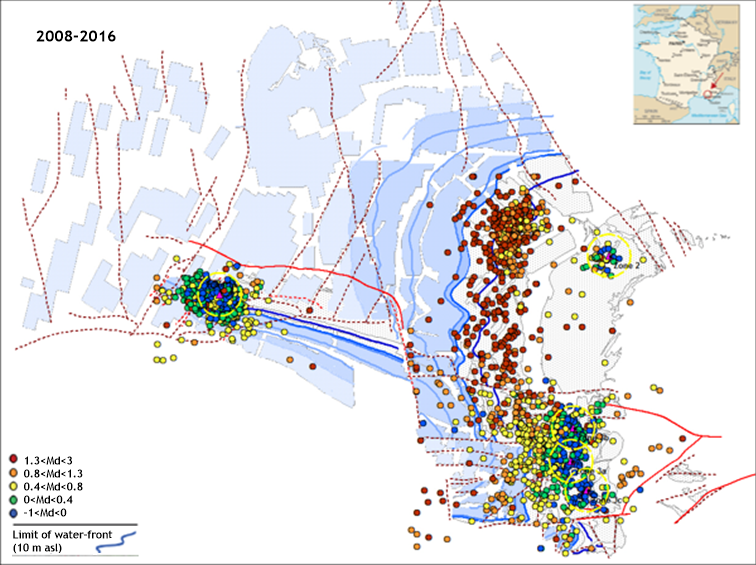 Map of the microseismicity recorded between 2008 and 2016 within the framework of the monitoring of Gardanne coal basin (Provence), following the flooding of the old mining works (Contrucci et al., 2018).

Using a local monitoring network is a favorable tool to monitor the microseismic activity:

For the management of the human-induced seismicity linked to the exploitation and new uses of the underground.

- To detect early signs of landslide or collapse of underground structures or natural or anthropogenic geostructures,

such as typically roof falls, pillars or roof fracturing, etc. It is especially adapted for fast but not sudden phenomena, so that there is time for instance to limit the access to workers or the evacuate the population at risk.

By its heritage from the French Coal Board Research Center (CERCHAR) and by the historical missions of the Ground and Underground Direction (DRS), Ineris, since the end of the 1990’s, is involved in the deployment of operational microseismic monitoring solutions adapted to the post-mining context and based on an integrated approach that combines technological and methodological developments.

Ineris works further on its developments (by means of SYTMIS and SYTGEO hardware and software and e.cenaris infrastructure) and widely responds to the needs and expectations of the geological and geotechnical risks managers (state entities, collectivities, industrial and engineering consulting companies) and research and development institutes.